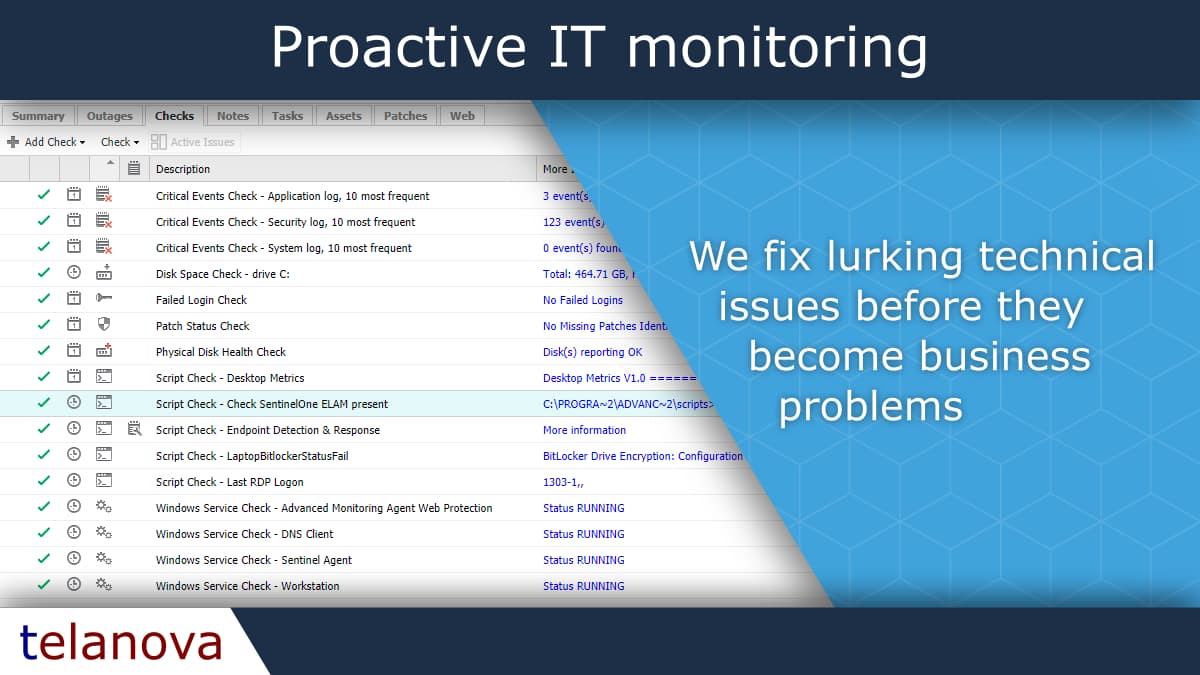 Benefit 4 of 8: Monitoring IT equipment 24/7. Monitoring tells us when something is wrong, or about to go wrong, so that we proactively fix lurking issues before they become major business problems. We tailor the precise monitoring checks to each customers’ environment. Some common ones are:

Was the backup successful? When you need to restore from backup you don’t want to find out they’ve been failing for months.

There are warning signs leading up to most hard drive failures. Replacing a drive before it fails completely results in less downtime and data loss. Servers usually have RAID to keep running even with a single disk failure, but if no one’s monitoring it, you won’t know to replace the failed disk before the next one fails.

Running out leads to database errors, file system errors etc which are time consuming and problematic to resolve.

Is it running? Up to date? Scanned recently? Infected? A single infected device can lead to the whole organization being held to ransom.

Windows update and other patches

Are all recent updates installed? Have any failed? A single unpatched device can lead to the whole organization being held to ransom.

The GDPR is quite clear that laptop hard drives must be encrypted. If an unencrypted laptop is lost or stolen it could lead to data breach resulting in a fine.

Is a hacker attempting to brute force access the device? This could be a sign that something else on the network is compromised.

Are critical services running? Such as for your line of business applications. No one wants to arrive in the morning to find out their critical application isn’t working.

You can’t rely on a staff member reporting these issues as they rarely do in a timely manner. The business then risks downtime, ransomware, GDPR breaches and fines.

Engage telanova as your IT team and we will monitor your IT equipment 24/7, minimizing your downtime, and increasing your profitability.